There is a track on a compilation that I can’t remember and I’m too lazy to google it, the song was by Pressler-Morgan One Plus One and the opening line is ‘I met Jean today’. It’s one of those rare and fetishized 7” records that seems about as likely to exist in reality as much as a fictional novel in a Borges short story. (Fuck, I couldn’t have written that when I wrote for Loud & Quiet, thanks Editor Andy.) Lunch Lady’s singer, Rachel Birke, sounds like my memory of the forgotten singer of Pressler-Morgan One Plus One with the added breathiness of Lydia Lunch (when singing rather than talking/shouting). The other Lunch lady, Birke, is more proficient in the conventional sense, but the feeling evoked and lyrical content is similarly arresting. How amazing? A contemporary album that expands, at least in the musical imagination of one listener, a long-lost and much-loved song into a (really good) contemporary album. The magic and mystery of music…

It’s another album from Upset the Rhythm that is sicker than a dog that ate a king-sized Dairy Milk bar; who’d have expected any less from the folks who pressed up Sauna Youth, Vital Idles, Constant Mongrel, Rattle, Terry and – with an assist from Goner – NOTS? Now they bring an offering from the L.A. DIY scene to our attention.

Juan Velasquez (guitar), Victor Herrera (bass) and Robert Wolfe (drums), back up Birke with tones, rhythms and textures that would not be out of place in the 1980s post-punk canon. However, they do so – and explain this themselves in a very handy press release – while exploring ideas of kitsch. This is clearly a creatively fertile approach that prevents the album veering into the po-faced seriousness that can afflict the sub-genre without getting daft. The feel of the album is generally detached and vague. Half-remembered and not quite explained memories sit alongside slightly saturated overdriven guitars. The guitars are frequently dialled back from fuzzy chords into chorus-laden arpeggios – recorded in a warmer way than the Killing Joke or Cure variety. It had an L.A.-ness like that Hockney painting of the fella jumping into a swimming pool. It is commercial but clever and inviting, healthy but tasty.

‘Angel’ and ‘Sweet One’ start the album with the classic post-punk meets power pop chug and chime. Birke ‘saw you and you were smiling.’ They take you through perfect slices of mid-1980s MTV-ready post-punk (I guess what the Americans would sometimes call New Wave due to its distance from the experimental aspect of post-punk) with beefy drums, wet chorus (or some similar modulation effect) on guitar, slight licks of synth and bass in the Steve Hanley tradition. ‘Sweet One’ has the melody of a song that, in a perfect world, would not just be a hit but would dominate the radio – particularly when the fuzzy oscillating outro kicks in to keep those listeners straining when some radio DJ rudely interrupts. ‘Window’ repeats the trick. There, Velsaquez’s guitar flickers around Birke’s considered phrasing. She creeps into a near falsetto until, at the end, it buzzes out into a fug of delay/digital feedback fuzz.

‘My Dead Dog’ and ‘Pardon Me Miss’ don’t deviate too far from the formula but by this point of the album that is by-the-by. You’re invested in listening to someone who is trying to wrestle with ambiguous situations without revealing or resolving much. It’s a pretty novelistic trick and placing it within the context of breezy, summery post-punk it is really subversive. If we’re going to continue with Latin American literary references from the first paragraph, the trick a little reminiscent of Roberto Bolaño writing. In the song ‘Dolores’ the line ‘they saw him killing in a heartbeat’, the internal monologue recorded in ‘Preacher Man’, and the fear of male company (and the suggestion of abuse) in ‘Young Bride’, if transplanted the four or five-hundred miles from L.A. to the Sonoran Desert (perhaps in the burning pink Cadillac on the album cover), could be asides from ‘2666′. All longing and death. A woman’s perspective against male power and violence. These themes, resolutely feminist and real in spite of the claims to kitsch, are sensitively backed up and unpretentiously embellished by the music.

‘Deeper Variation‘ and ‘Deeper’ rounds the back end of the album off with a statement of bored desire. Maybe I’m reading too much into this, but as they say in L.A., ‘yeah, well that’s just your opinion, man.’ (If the band read this, sorry, I hate it when idiots make clichéd pop cultural references about Manchester and now I’ve clocked up two.) WHY NOT HAVE A LISTEN AND FIND OUT FOR YOURSELF? 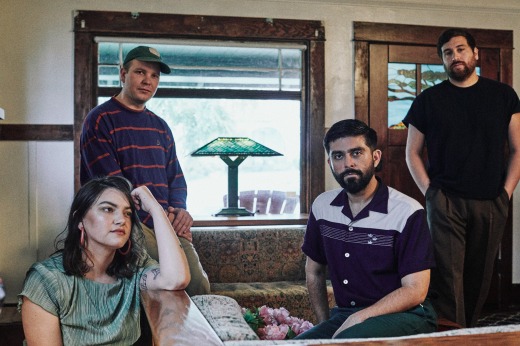