Following on from our Top 50 list released earlier this year, we’ve had our thinking caps on and put together another 50 favourites that have had us hooked for the remainder of 2018!

Don’t be daft – Keep an eye on our lists to come and make sure you don’t miss out on some of the year’s biggest bangers!

Full list here and a handy Spotify Playlist can be found here! 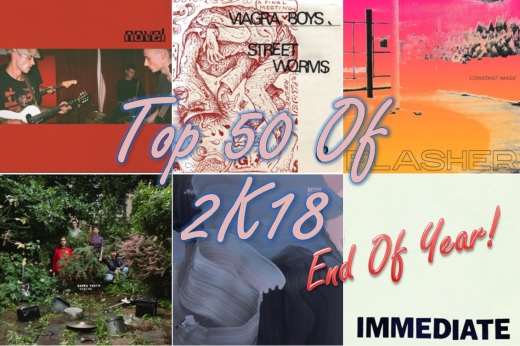 One of our favourite outfits doing the rounds at the minute, West Coast noisemakers Flat Worms released this frantic assault a few months back as a follow on from their highly acclaimed debut LP last year. Fast and loud, just how we like it.

We recently had the pleasure of chatting with Flat Worms frontman Will Ivy about the above and much, much more!

Mega infectious art-pop from the streets of LDN, we discovered WOOZE just a few months prior to their appearance on ‘Made In Chelsea’ (!), but we’re not holding that against them… Full on contemporary but sounding marvellously 70’s all the same, it’s hard to sit still when this is on.

More from Ty Segall, this time with the equally prolific Tim Presley under the tried and tested White Fence moniker – their second release together (following on from 2012’s ‘Hair’). Leaning in toward the sounds of the 60’s, ‘Good Boy’ is born out of ‘Mean Mr Mustard’-esque beginnings, with sweet vocals soon to follow from both men as they match guitar wielding chops.

Thundercat mixing it up with BADBADNOTGOOD AND Flying Lotus? Woof woof! This has all the trappings of a Thundercat jam, with a super groove running throughout and sitting under his joyous falsetto vocal. Slicker than slick.

As prolific as the likes of Oh Sees and Ty Segall across our list, Stephen Black (a.k.a. Sweet Baboo) recently put out a debut album under new project Group Listening. Along with jazz pianist and experimental musician Paul Jones, the pair have cooked up a collection of ambient works called ‘Piano & Clarinet: Selected Works Vol. 1’, with ‘The Dog’ being a charming, heart-stopping cut from its eight tracks.

From debut album ‘Loss’ (out on heavy tastemaker label Holy Roar),the at times cinematic ‘Denial’ is a smasher of an album opener, relentless yet captivating from the word go.

Read our review of ‘Loss’ here – A record we’ve described as “-a stunning debut that many will be scribbling onto their end of year lists.”

Another late in the year discovery for us, we recently caught Mayshe-Mayshe at a show in Manchester and were blown away. Yorkshire based solo project dealing in infectious electronic pop – ‘Ecology’ is proper heart-swelling stuff.

Whirlwind math-pop from Peterborough trio FES with the sweetest of vocals and guitar twiddles. Another in a long line of FES singles that immediately hit the spot!

I first heard this record one late afternoon in the office, trying to maintain my composure whilst the hypnotising sounds coming through the headphones were doing their best to send my head spinning like a top. From one of the mysterious bods behind Swedish collective Goat, ‘Carry The Load’ is a total mind-expanding psych journey.